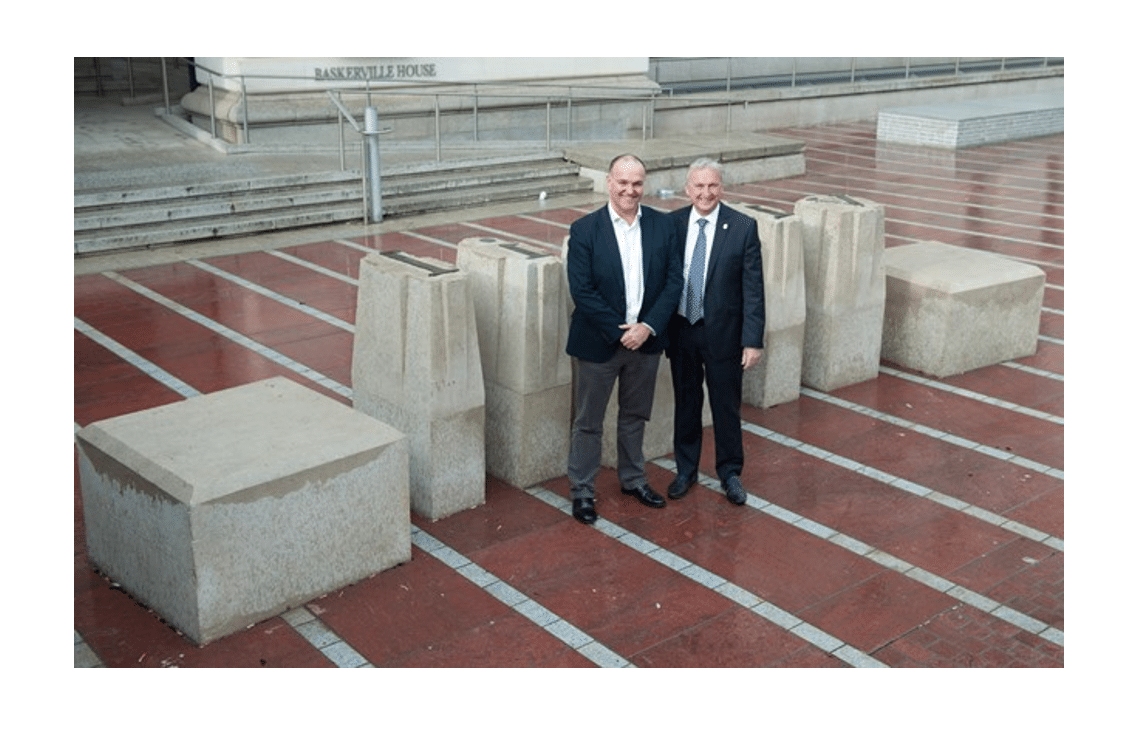 Centenary Square in Birmingham has welcomed back its first piece of public art – an iconic sculpture, created to celebrate the work of the famous 18th century printer John Baskerville.

Designed by artist David Patten, the Industry & Genius sculpture has been a part of Centenary Square since 1990 when it was installed for an ICC Percentage for Art scheme. It was removed to allow the bold redevelopment of the public space to take place – and has now become the first piece of public art to be returned to the square.

The sculpture is made up of columns of Portland Stone, on top of which are the reversed bronze letters that spell ‘Virgil’, the Roman poet whose works were printed in 1757 by Birmingham’s John Baskerville in the famous typeface that bears his name. The word is in reverse, as it would have been in the traditional printing process, and the name, ‘Industry & Genius’ comes from an 18th century poem in praise of Baskerville.

Leader of Birmingham City Council, Cllr Ian Ward, welcomed the sculpture’s return. He said: “It’s fantastic to see Davie Patten’s Industry and Genius sculpture back where it belongs outside Baskerville House, as the first piece of public art to return to Centenary Square – which is being transformed into a world-class public square. Work is continuing to progress well on this scheme – which is due to be completed this summer – and Birmingham City Council is working closely with Bouygues UK to ensure it is delivered accordingly.”

Chris Hall, interim Deputy CEO at Acivico, the delivery team acting as project manager on behalf of Birmingham City Council, said: “This sculpture is a popular one in Birmingham, and we know that people were looking forward to having it returned to its central position. As the city moves forward with its exciting plans, it doesn’t forget its interesting past and the inspirational men and women that helped to shape it.”

Rob Bradley, CEO of Bouygues UK, commented: “The return of ‘Industry and Genius’ is a key milestone in the redevelopment of Centenary Square. We’re delighted to have worked hard with Birmingham City Council to achieve this; bringing a great piece of the city’s heritage back to public use.”

For the project Acivico and the city council teamed up with the Birmingham Museums Trust and Bouygues UK, the construction company behind the transformation of Centenary Square. Once completed, Centenary Square will be a stunning public space in the heart of the city, featuring a 5cm-deep pool with water jets, which can be drained for events to take place. The entire square will be illuminated by 43 lighting columns. Work on Centenary Square is due to be completed this summer.